Tracing You presents a website’s best attempt to see the world from its visitors’ viewpoints. By cross referencing visitor IP addresses with available online data sources, the system traces each visitor back through the network to its possible origin. The end of that trace is the closest available image that potentially shows the visitor’s physical environment. Sometimes what this image shows is eerily accurate; other times it is wildly dislocated. What can a computational system know of our environment based on the traces we leave behind? Why might it want to see where we are? How accurate are the system’s data sources and when might they improve? Finally, what does this site’s attempt to trace its visitors reveal about who (or what) is reading the web? By showing how far it sees in real-time, Tracing You provokes these questions and more.

Every time you visit a website, the computer serving that site records data about the visit. One piece of that data is the visitor’s Internet Protocol (IP) address. A numerical string (e.g. 203.0.113.4), the IP address uniquely identifies the device used to view the site, whether it’s your phone, laptop, or tablet. Every IP address is registered with the Internet Assigned Numbers Authority, and thus has data associated with the registration. Tracing You starts with this IP address and follows the trail it leaves. First it looks up the IP address using ipinfo to obtain geolocation. This is represented as a latitude/longitude pair (e.g. 48.8631831,2.3629368) that identifies a precise location on the earth. The latitude/longitude is sent to Google, where it queries the Street View, Static Maps, and Javascript Maps data services. Using these services, Tracing You searches for the closest available match it can find, whether it’s a street image in front of the location, an interior image inside the location, or, if nothing else, a satellite image from above (e.g. many locations in China). Once found, this image is combined with text information from ipinfo and shown on the Tracing You interface.

These queries happen so quickly that when you look at the Tracing You interface you should see an image related to you. You will be the site’s most recent visitor at that moment. The image you see may be very close to your current location, or even photographed from within the building you are in at that moment. Alternatively, the image may be down the block, a few blocks over, or even further. How close it gets is very much dependent on how networks are built, configured, operated, and distributed where you are, which network you use, and the accuracy of the data associated with those networks. The more you look at the site, the more it looks back at you. Big data is continually refining its “picture” of the world. As that picture becomes more resolved, Tracing You will get more accurate. As new data sources become available, I will integrate them into the work. Tracing You (in background) at Galerie Charlot in Paris, France Tracing You at PLUNC Festival in Lisbon, Portugal

Tracing You was commissioned by and premiered at Galerie Charlot in Paris for my solo exhibition Systems Under Liberty in December 2015. Since then, the work has been exhibited at the following: 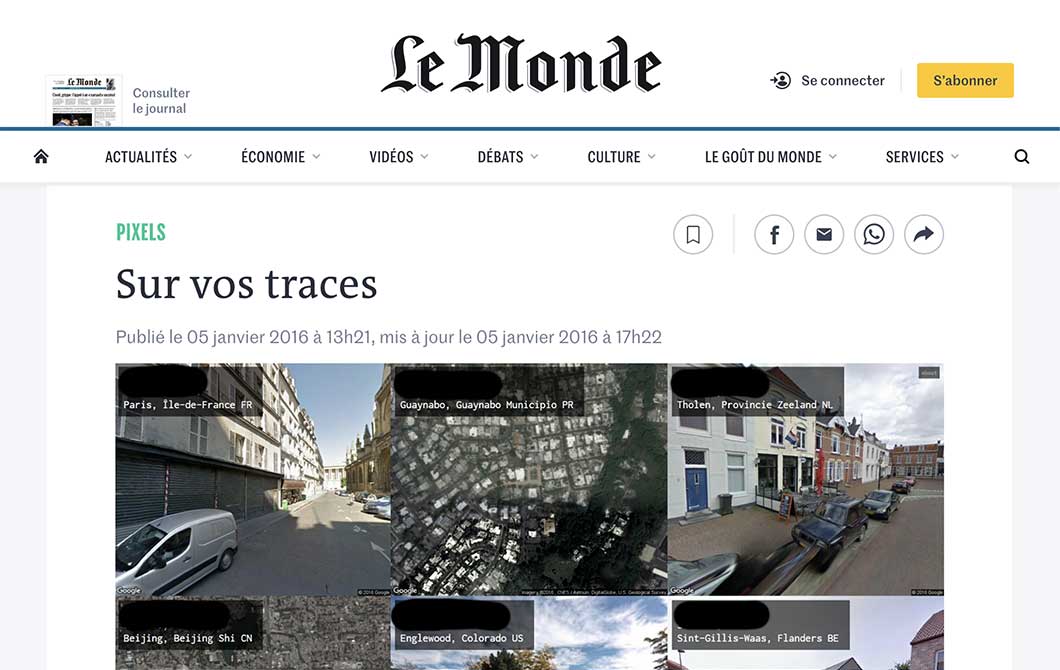 Tracing You at PLUNC Festival in Lisbon, Portugal

In 2017 I published a paper about Tracing You in the journal Big Data & Society. I use reactions to the work to discuss expectations for surveillance online, and how, when considered within the context of social network structures, those reactions reveal a desire for visibility. My thanks to curator Valentina Peri at Galerie Charlot, Premio Arte Laguna, and the College of Fine and Applied Arts at the University of Illinois at Urbana-Champaign for their support of this work (within the context of my exhibition at Galerie Charlot). Also thanks to ipinfo.io for providing IP geolocation data.