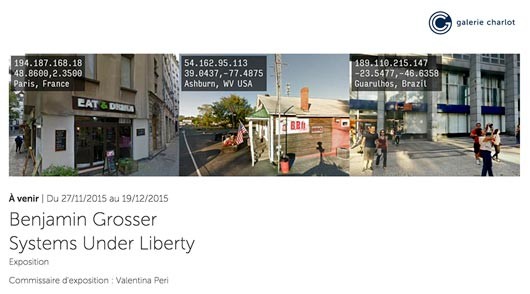 Systems Under Liberty at Galerie Charlot in Paris, France

I’m excited to share that opening this Friday, 27 Nov is my solo exhibition Systems Under Liberty at Galerie Charlot in Paris, France. I will exhibit a number of works: net art, installation, video, and more. As part of the show I am also launching a brand new work (stay tuned). You can see the catalog here.

While curator Valentina Peri and I were always framing the exhibition within ongoing debates of increased surveillance by the French government, we had no idea of the climate we’d find ourselves in as the opening nears. France (and the US) are using the latest terrorist attacks to argue for new expansions of state surveillance; I’ll be in Paris midway through the show to talk about my work within this rapidly shifting context.

… Grosser approaches his subject matter through the lens of an artistic practice of «culture jamming», or cultural sabotage. [He] sets out to hijack software platforms that have become part and parcel of our everyday life through a tactic of «poaching». By imagining unintended applications and designing new extensions for Facebook, Gmail, Artificial Intelligence Systems, IP Localisators etc., the artist subverts the mechanics of IT services that are in the same time surveillance systems and data collectors. His ironic approach elicits an effect of detachment, which alerts users to some of their automatisms and to their place in the dominant cultural order. In so doing, Grosser lays the groundwork for an anti-discipline that enables us to assert ourselves as active historical subjects from within the current regime of technological power. A healthy antidote to passive victimhood and an instrument of peaceful resistance, his «digital disobedience» points towards chances of escape.

My thanks to Premio Arte Laguna and the University of Illinois College of Fine and Applied Arts for their partial financial support of this project.