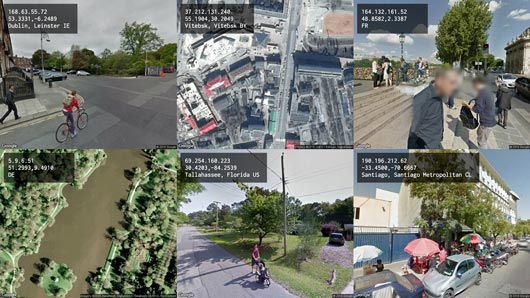 I have a commentary in the latest issue of the journal Big Data & Society. The text, titled “Tracing You: How transparent surveillance reveals a desire for visibility,” examines feedback to my computational surveillance work Tracing You. I argue that reactions to the work—in particular those who are angry Tracing You isn’t more accurate than it is—reveal how we’ve become conditioned to expect surveillance. Why?:

One answer lies in “Web 2.0’s” (O’Reilly, 2005) insistence on radical transparency. Social media in particular has conditioned many to not only accept high visibility, but to desire it (Bucher, 2012: 1175). This is because being as visible as possible on sites like Facebook and Twitter is the key that permits entry into and full participation within those site’s systems of interaction and connection. Users can lurk or hide if they choose, but doing so severely limits user experience. When this desire for visibility intersects with ubiquitous transparent veillance, it contributes not only to an acceptance of being seen, but also helps to produce the negative emotions expressed by users less visible to surveillance systems. Being less visible within social networks means having less power; one’s power (to influence opinion, to increase friend networks, etc.) is dependent on one’s visibility.

As a result, many visitors to Tracing You have already been conditioned by social networks to equate visibility with power. Thus, by mirroring the veillant structures of sites like Facebook, Tracing You also produces—at least for some of its visitors—a similar desire for visibility. This happens despite the overt potentially negative surveillance implications proposed by Tracing You’s ability to reveal one’s physical location.

You can read the full text here. The piece is part of a special issue titled “Veillance and Transparency: A Critical Examination of Mutual Watching in the Post-Snowden, Big Data Era,” edited by Vian Bakir, Martina Feilzer and Andrew McStay.