On the occasion of Alan Turing’s 100th birthday, I’m posting some Turing-related press I received recently. It was a two-page spread in the Israeli magazine Odyssey. Odyssey is a print-only Hebrew-language publication that covers science, philosophy, technology, and culture. It’s published by the University of Jerusalem and Teva. In their Issue 14, which was dedicated to Alan Turing, they featured my Interactive Robotic Painting Machine as well as a piece from my Flexible Pixels project. 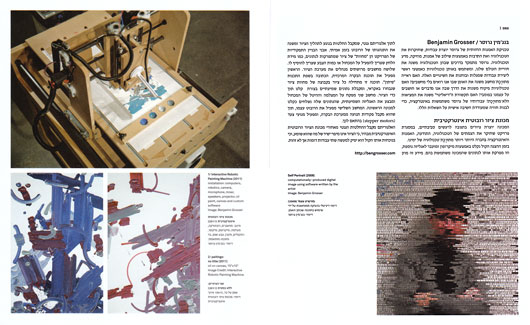 Benjamin Grosser
As a visual designer, Grosser creates projects, exploring technology and culture through a combination of art, music, science and technology. Grosser focuses on the ways in which technology is changing our world experience, and uses the same technologies as leaders to create jobs that reveal and examine these changes. His vision – are computers changing the way we see without computers? Are control technologies are changing the way we speak or think of ourselves in public? The works of Grosser use human interaction, this creates an experience that encourages personal contemplation on these questions.

The robotic painting machine.
It’s a machine that creates images in response to environmental noise. It is part of a project that investigates the connection between technology, consciousness, art, and interaction in society and how it’s becoming more and more part of today’s technology. After the sound goes through a microphone it gets forwarded to another computer which decomposes the data that the microphone gathered. This information is fed into a genetic algorithm to make decisions about the painting process and changes the behavior of the robot in real-time. Functional building blocks of the project are “gestures” of painting which break down the data, such as the degree of pressure one has to use with a brush or the amount of color to be added to it. Three networked computers running the system conduct the drawing. First is the central control software, written in the “Python” programming language. This program begins each painting with a group of randomly selected drawing gestures, and receives data in the form of auditory input during the drawing. The second computer controls the camera and the projection of the brush and make the auditory analysis, its data is sent as input to the first machine. The third computer runs the robot itself, while it receives commands from the motion control, and stepper motor operator. The algorithm calculates the genetic decisions behind interactive robotic painting machine, making it clear that the painting is not a direct mapping of what it hears, and that the presence of a voice will in fact create two similar works, but not identical.