A few weeks ago I wrote about the online coverage of my Interactive Robotic Painting Machine project. Since then the list has continued to grow, with writeups on a number of additional high-profile sites, as well as expanded international coverage. 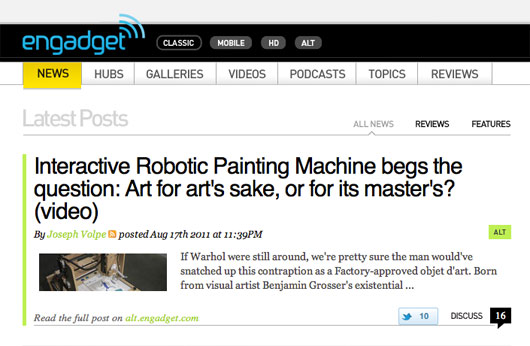 Interactive Robotic Painting Machine on the front page of Engadget.

While much of the writing addressed the artistic or philosophical aspects of the work, a few included some humor as well. A few of my favorite quotes:

Grosser may have unknowingly birthed the apocalypse with his Painting Machine. —Huffington Post

He [Grosser] created a robot that’s — how to put this gently? — a thin-skinned neurotic. —Fast Company

I can already hear the outcry of the artists’ associations for protection of their works as soon as the following robots would fall into the hands of pirates. —Robonews [Germany], via Google Translate

If Warhol were still around, we’re pretty sure the man would’ve snatched up this contraption as a Factory-approved objet d’art. —Engadget

Overall a much nicer, more cultured use of artificial intelligence than, say, a swarm of flying death robots. —the creators project [UK]

An incomplete list of coverage around the ‘net (if a link is missing, it’s because the page went offline since this list was first published):