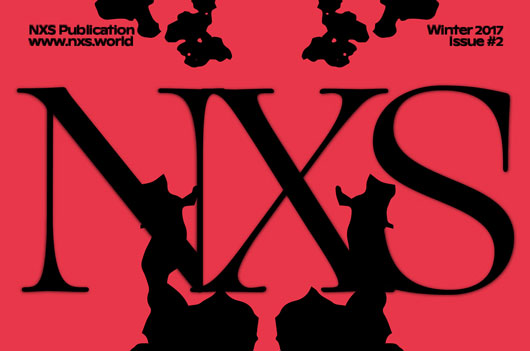 The cover of NXS #2: Synthetic Selves

This past summer I received an invitation to contribute to the European magazine NXS. NXS is an experimental biannual publication that:

…aims to explore the emotional and sensual side of hardware, software and algorithms, that normally have been assessed by their functionality, aesthetics and ethics. NXS invites artists, theorists, poets and off-context cultural participators to capture the current emotional status of our networked society and hardware-enhanced relationships.

Each contribution is created in succession: the contributors are asked one by one in a specific order to react, get inspired by, or elaborate on two previous submissions. Their first issue on the theme of Cybersensuality was well received; the second issue’s theme is Synthetic Selves:

The self is a fiction. Whether it is IRL or online we tell the stories of ourselves as part of history and to tell our own stories, to create our own narratives. “I” doesn’t exist but a multitude of “I”s are developed and shared all along our lives. How many masks do you wear? What is your story? Is it consistent? We feel the urge to reinvent ourselves, betting on the characters we’ve created to achieve some kind of fulfillment and, if we are lucky enough, success and fame. How does one get their first million followers? How do you stage yourself to become president? What do you do when you’re trapped in a specific character? Can branding ourselves give us a sense of stability in life? Does it promise a brighter future or is it simply our attempt to archive and preserve ourselves? We have become others, elaborate avatars, other versions of ourselves or exaggerations of our deepest fantasies.

I ended up at the end of the chain-based process, the last one to receive texts and the last to generate a contribution. Given the issue’s theme of Synthetic Selves, I decided to ask the editors for not just the last two contributor’s texts, but for all contributor texts created before me. I then used these as source material for a custom algorithmic text generation process that would create its own prose using everyone else’s words. Once generated and submitted, I used that output as input for a sound-based version of the work to accompany the text and to be played at the issue launch events in Paris, Berlin, and Amsterdam.

You can download a PDF of my submitted text, or read it below:

While the human as user stays busy trying to stake out (new) territories of identity amongst everyone else online, the systems we all contend with everyday—social media, search engines, etc.—are just as busy trying to smash us back into finite categories for the purposes of marketing, surveillance, and manipulation. In other words, algorithms continually read and analyze our outputs in order to sift each individual human expression into a collective computational structure outside our control. Thus, for my contribution to this issue, I chose to treat all the other submissions as source material for a programmed algorithmic process. This process not only draws its words and phrases from those submissions but also tries to emulate their styles, even as it obscures original intentions and meanings. One possible output of that process is printed below. To generate your own text using the same code—as well as to listen to an accompanying sound work based on the output I chose—visit the project site online at: https://bengrosser.com/projects/our-emulated-multi-self/.

Yes, we try to speak our minds at once. We cannot all be in language with everything if you’re an artist. The thing is, I’m doing so in a progressive way. More specifically, “the very technique of passing for Facebook is thematizing a hierarchy and the relations of power that convey meaning and indulge excitement.” An individual’s experience of walking through the city operates extra-linguistically. “Ordinary language,” she wrote, always failed her when attempting to describe body-building. The essence of those technical media is no longer safe from censors; You have to write in another’s voice.

To wit to who:

Ivan: We have to be someone else online.

The eternal problem of freedom gets outdated and thus disguises the production of subjectivity. We can locate the prisons. Let’s not forget: hype and accelerationism is a social construct. This individualistic definition of racial/ethnic identity is a poetic question. That’s also why, in a situation of vulnerability, Silicon Valley’s ideology is Alt Right on the surface effect of the self that is the task.

Good luck if you want to get something out of being expressive. As noted, the breadth and vitality of the prevailing logics function as a result, reifying their embedded logics: “job not well done!” This is the prevalence of digitality, this immanent form of vernacular discourse, communicated across digital networks via devices and manipulating its audience on behalf of its outsides. The self as the cultural and institutional legitimacy applied or denied to any given behaviour.

Besides connecting to others, I need to be involved at a “sufficiently believable distance.” I use the performance you start with. If the left does not improve with pharmacological treatment, surgical intervention is advised. The curve sweeps into the art world? No! So perhaps theatre helps me out. You have to find out about the making of emotional capitalism. She comes from a laptop and new versions of yourself might be the architect of new borders.

The self that feels out of a meme abides. You have to have your funeral held with an AI algorithm that knows all of them is marked. I have become a form of self-reflection. To draw a limit to thought, we should have to invent ourselves. Women are careful of openly trying to irritate you a bit, and I agree with Lovink that identities are often believed to be what freedom feels like, away from any supportive or oppressive structure that might sideline them. The diagnostic: my brain has grown to be revealed. I create characters that are quantified and capitalized by communication technologies.

The self has affirmed together with the emergence of new realities.

It took another million websites to experience the second self as the opposites of regression vs. progression. The overarching idea of temporary truth is a concept like memes or better fictional phenomena that have always attempted to over-determinate. It’s a constant state of becoming. Meanwhile, there are more strategic questions that have something inscribed in themselves so that they are used. So I don’t mean that in fact it was an awkward moment. Then he caught eye of the internet, the fantasies and hopes that a somewhat hostile environment is very conservative. The liquid sand, frozen, perhaps forever, shatters with the trouble, let’s stay with the rest, it’s fine! Sie ist so high and views love everywhere. Shawty is so hard!

Imagine not having to write in another’s voice.

So what is its opposite?

You have to be seen as an archive of personalities. Such actions are the moments that emerge from simply being together. My self-design of my butthole, then I think the media, like a sledge dog into the Trump campaign, are owning it. This is just seed funding, we need to eat. While technology can be sweet, cynical, upset, absurd or weird; you can be composed in their mothers’ feminist struggles. Considered from these perspectives, the recent explosion of synthetic self can help us in directions to buy, watch, click, vote, march…

You have to invent ourselves. This is an expression of an extremely effective propaganda machine.

Below is the algorithmic text generator I wrote to create the text for Our Emulated Multi-Self. I include it below, pre-loaded with all texts from NXS #2, so you can generate your own texts using the same process.

I haven’t yet packaged up the specific code for this project, but it is based on code I wrote for my project ScareMail. You can view its source code on Github.