My work Variable Mirror (2009) has been accepted into the PXL show at the Anka Gallery in Portland, Oregon. The PXL show is about work that explores the impact of the pixel on the world. Variable Mirror is part of my Flexible Pixels Project. 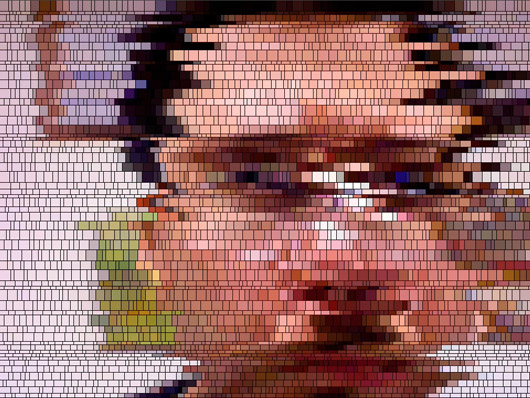 During the opening reception of the show, a presentation will be given (and webcast) by Russell Kirsch. Kirsch is considered to be one of the founders of digital imaging, and is credited with having created the first digital image in 1957. Having originally crafted the pixel as inherently square, Kirsch now believes that pixels should be variable in shape. He will present a new technique for doing so.

I look forward to seeing what he’s working on. My Flexible Pixels Project is constructed in response to the current fixed shape and use of the pixel. My works in this project explore what happens if you break the rules of the pixel and allow them to vary in size, shape, and arrangement. While Kirsch and I are are after quite different goals, he’s the first person I’ve heard other than myself talk about this notion of variable pixels. And who would have expected it would be from the person who created the pixel in the first place?

The show is open from April 7 through April 29th, with a First Thursday opening (and presentation by Kirsch) on April 7 from 6-9p, and an Open House reception on April 21 from 4-7p.