On April 26, my interactive robotic painting machine will make its public debut at the Krannert Center for the Performing Arts in Urbana, IL, 7:30p. The result of over a year’s worth of work, the machine uses artificial intelligence to paint its own body of work and to make its own decisions. It also listens to its environment and considers what it hears as input into the painting process. 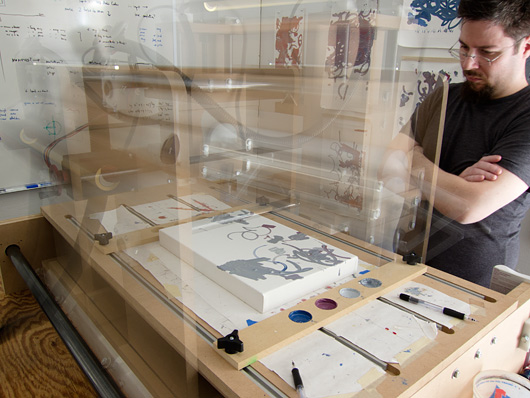 So why is this first appearing at a performing arts center? Because it will appear in a collaborative work between myself and composer Zack Browning, titled Head Swap. Head Swap is a work for amplified violin and interactive robotic painting machine that will mix music, art, and robotics into one multidisciplinary performance. The machine will paint a painting during the piece, using what it hears to help it evaluate what it makes. The violinist, Benjamin Sung, will play Browning’s music by using what he sees the machine paint as guidance through the score. The machine also functions as a musical instrument itself, feeding pitched chords (dyads usually) back into the work.

There will be two other, older collaborations between Zack and myself on the concert. Back in the ’90s, I wrote a sound synthesis software package called GACSS, that both Zack and I used for our work. Zack will have two pieces on this concert for instrument and computer-generated sound that utilize the software I wrote. This was a fruitful collaboration that produced a lot of rocking music!

I’ll be posting lots of documentation of the robotics project over the next month or so, but if you’re in town, please come by and check out the concert.