Recording of Shift for Six Udderbots 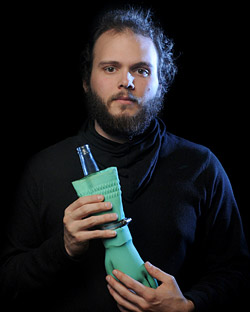 On January 19, 2011, Jacob Barton performed the world premiere of my musical work titled Shift (2010), at the Contemporary Arts Center of Virginia in Virginia Beach, VA. Barton is the world’s premiere Udderbot virtuoso, and Shift is written for one live udderbot and five recorded udderbots.

Shift was originally an unfinished composition of mine for large chamber ensemble, but I rewrote it for six udderbots when Jacob commissioned a new piece from me last fall. The score provided him with rhythms and pitch cluster choices, but doesn’t specify specific pitches. Thus Jacob made those choices from the given material and wrote out a final score. Because the work is for six udderbots and Jacob is only one, he recorded five of the parts on tape and then plays the final part live with the tape during performance.

listen to Shift (view the score)