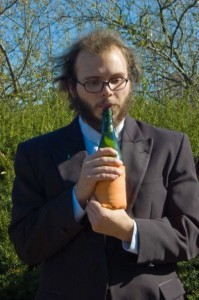 Jacob Barton will be performing the world premiere of my musical work titled Shift (2010), tonight (January 19, 2011) at the Contemporary Arts Center of Virginia in Virginia Beach, VA. Barton is the world’s premiere Udderbot virtuoso, and Shift is written for one live udderbot and five recorded udderbots. He is currently traveling on his Udderbot World Tour 2011.

Made of a glass bottle, a rubber glove, and water, the udderbot’s quirky appearance and unassuming timbre make it a “friendly” instrument; however, with a range greater than the concert flute’s, the udderbot is no mere novelty. The recital will feature music for solo udderbot player; udderbot with electronics; chamber music with traditional instruments; and multiple udderbots. The udderbot will substitute for its electronic predecessor, the theremin, for the oldest piece on this recital, Martinu’s “Fantasie” from 1944. A majority of the music being performed is “microtonal”, i.e. using notes and intervals that fall “between the keys” of the piano (but are no trouble at all for the udderbot).