In preparation for leading a discussion last fall, I did a deep reading of chapter 5 of Paul Virilio’s The Vision Machine (download a free PDF). As I’m finding is typical with Virilio’s writing, he packs a lot of ideas into a short number of words. But there are a few overarching threads that weave in and out of the chapter. I present a couple of them below. While the book was published in 1994, it is still very relevant as a critique of today’s technology and culture. In fact, at times it seems eerily predictive of our present.

Is TV Affecting Our Ability to Store Memories?

Of most interest for me was the idea that the temporal nature of film, video, and computer graphics is altering our ability to create memories. The way I interpret him is that we only have available to us so much “depth of time” (in relation to depth of field), and splitting our experience into discrete time slices thus limits how much of it we can retain. Before temporal imaging (e.g. film or video), our memories were not stored in a frames-per-second manner, but were more about story and sense perception.

In real, non-imaged life, the temporal resolution of memory is affected by the context of the event being remembered. Think about the difference between memories of a casual conversation versus a car accident. The conversation is likely to result in memories primarily about some of the things that were said, with very little temporal resolution of the physical surroundings. But in a car accident, the context results in an extreme temporal focus. Time appears to slow down as each detail of the impending critical situation is imprinted on our brains. We would have a very different story to tell about each of those events, and the types of memories recorded were dependent on the context in which they were perceived.

But in virtual experience driven by temporal imaging such as film or TV, the pace of cuts can flood our short term memory. Consider the above video clip, taken from the opening of the reality TV show Hell’s Kitchen, Season 8 (I have removed the audio). How much of this can you retain? Recent studies suggest that we can only remember three or four things at once. In a real life experience, the context of an event can expand the length of these three or four things. But the frames-per-second nature of video, and the fast-paced nature of video edits may be robbing us of the ability to perform such an expansion. Virilio would say that our temporal construction of memory is an essential part of what helps us distinguish between real and fake, and if virtual imaging is changing our ability to store memories then it’s changing our ability to identify the real.

This is one of the concepts I explore in my recent work, titled Speed of Reality. The piece looks at how these fast edits are affecting our perception of reality TV. Does it change how we form memories? If yes, does it change it in non-TV contexts as well? Is “reality” media altering non-mediated reality? 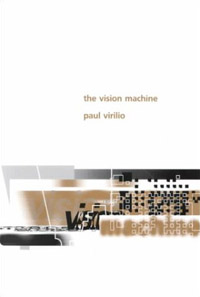 The Vision Machine, by Virilio

While my interpretations regarding memory formation outlined above were of most interest, Virilio focuses most of the chapter on what he calls the Vision Machine. He saw us as entering a world of sightless vision, where machines create their own view of the world for their own purposes—thus changing our relationships to reality and power. This “splitting of viewpoint” between humans and computers is an essential component for artificial intelligence.

Vision machines that perceive us and interpret us for their own purposes, even in our private spaces, has lead to an erosion of public and private space. They also enable a new genre of military deterrence, where images, and the manipulation of them, become more effective as ammunition than conventional weapons are. This leads to a “total dissimulation” where wars are fought through images by the Perceptron, a 24-hour real-time telesurveillance-enabled and -controlled vision machine. In this space the plausible or implausible replaces true and false—it’s all about what the images may or may not represent. The speed of imaging becomes paramount, and thus is the machine’s primary sense. As such, extensive time gives way to an experience of ‘intensive time,’ or technologically accelerated moments beyond our comprehension that result in a new concept of reality where speed prevails over time and space.

Certainly Virilio’s predictions about sightless vision have come true. In the New York Times’ recent article, titled Smarter Than You Think – When Computers Keep Watch, the author details many of the ways that computer vision technologies have crept into our daily lives. Everything from the health care industry to computer gaming companies now employ ‘smart’ vision technologies in order to improve human-computer interaction and data collection. Without question, these applications are fun and potentially useful. But the technologies are also used by law enforcement and corporations to elicit our unspoken reactions and thoughts about the things we see and hear.

Google’s landmark recognition program Goggles can recognize architectural artifacts in photographs and automatically provide background information about them. Some have asked Google to include facial recognition in the program, something they could easily do. Eric Schmidt, Google’s CEO, says they think doing would be “too sensitive,” and risk “enabling stalker behavior.” At least for now humans appear to be in control of the technology. But as these applications become more and more tied into national surveillance camera networks, and increasingly used by machines for machines, Virilio’s prediction of a Perceptron could inch closer to reality.