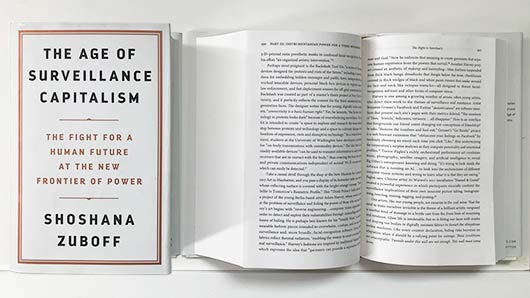 The Age of Surveillance Capitalism by Shoshana Zuboff

I was happy to find my works Facebook Demetricator, Twitter Demetricator, and Go Rando all cited in Shoshana Zuboff’s new book, titled The Age of Surveillance Capitalism: The Fight for a Human Future at the New Frontier of Power. Zuboff writes:

I have suggested that too many of the best and brightest of a new generation devote their genius to the intensification of the click-stream. Equally poignant is the way in which a new generation of activists, artists, and inventors feels itself called to create the art and science of hiding. The intolerable conditions of glass life compel these young artists to dedicate their genius to the prospects of human invisibility, even as their creations demand that we aggressively seek and find our bearings. … Artist Benjamin Grosser’s Facebook and Twitter “demetricators” are software interfaces that present each site’s pages with their metrics deleted: “the numbers of ‘likes,’ ‘friends,’ followers, retweets … all disappear.” How is an interface that foregrounds our friend count changing our conceptions of friendship? he asks. “Remove the numbers and find out.” Grosser’s “Go Rando” project is a web browser extension that “obfuscates your feelings on Facebook” by randomly choosing an emoji each time you click “Like,” thus undermining the corporation’s surplus analyses as they compute personality and emotional profiles.

I’m currently working my way through the text … highly recommended.