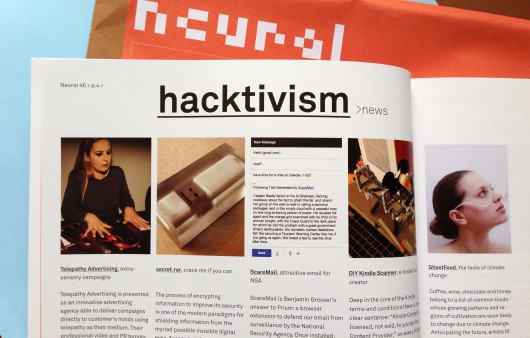 My work ScareMail, a browser extension that makes email “scary” in order to disrupt NSA surveillance, was reviewed in the 20th anniversary issue of Neural. From the review, written by Aurelio Cianciotta:

The project aims to uncover defects in surveillance based on analysis of keywords wide-ranging, such as those found in the Black Book of the NSA. Many terms that could hypothetically indicate a message exchange between terrorists are extremely common and de facto make everyone subject to monitoring. ScareMail responds to this attack on the confidentiality of personal information by proposing a model of privacy diametrically opposed to the common concept: privacy that emerges from the multiplication of words in plain sight rather than from encryption and subterfuge.

Another project of mine, Facebook Demetricator, was previously reviewed in Neural as well.