In case you’re in Brooklyn, NY over the next few days, there is one performance left of my Not Pitch for baritone saxophone and computer-generated sounds. This one is at the JACK performance space on Monday, July 2 at 8pm. Saxophonist Rhonda Taylor is performing the work during her solo concert there that night as part of their Sonic Series. 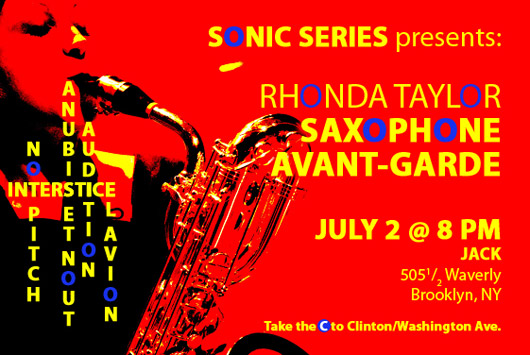 This concert will also include several works by one of my dearest friends and one of the world’s most fabulous composers, Rick Burkhardt. Seriously, Rhonda plus Rick is about all you need to know. This is Rhonda’s second concert in NYC this week. She played the work on June 29th at ThingNY’s Seven Immediacies Series at Vaudeville Park.  All this comes a few months after she released a new disc that includes Not Pitch.