Recording of Not Pitch Released on CD and Digital

Contemporary saxophonist and assistant professor Rhonda Taylor has released a new compact disc that includes her recording of my Not Pitch for amplified baritone saxophone and computer-generated sounds.  The CD is titled Interstice, is published on the shh label (#0135), and is available for purchase on disc or as a digital download via iTunes, Amazon, or CD Baby. 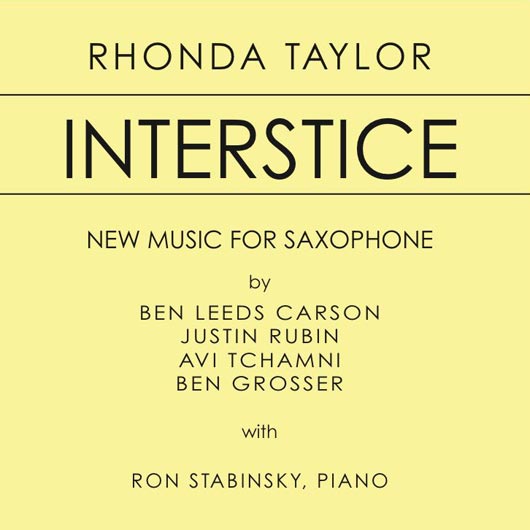 The cover of Interstice, by Rhonda Taylor

I wrote Not Pitch in 1995 for my good friend and saxophonist Taimur Sullivan. He premiered it that year at the Settlement Music School in Philadelphia, PA as part of a concert with his sax quartet PRISM. Taimur now also directs the saxophone studio at the North Carolina School of the Arts, where he has been a professor for many years. In recent years, Rhonda has toured the work around the United States, culminating in her release of the piece on this new CD. This included a live performance at her CD release concert on March 2, 2012 at New Mexico State University where she is an assistant professor. 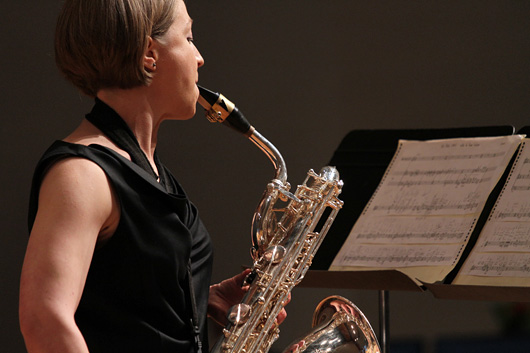 Rhonda is an incredible saxophonist, and, quite frankly, performs the work masterfully.  Her sound on the baritone is intense and active, and she brings a hard core virtuosity to the piece. I couldn’t be happier with her recording of the work, and my only suggestion is for you to play it loud. Before this CD project, Rhonda has released recordings of other contemporary composers, including a disc of works by my good friend and composer Rick Burkhardt.

I created the computer-generated sound component of the work using my custom synthesis software package titled GACSS. The program note I included with the disc reads as follows:

Looking back on this piece from the present, I see similar themes with my current practice. For example, I’m interested in the issue of agency. Who has it? Who doesn’t? Applying this question to a performance of Not Pitch: is the tape running the show, or is Rhonda? When I composed the work, who had more power then? The compositional system I setup to generate material, or myself as an operator of that system? And when it came time to produce the tape, how much control did my synthesis software hold over the process? I have my suppositions about these questions. You will have your own.

The rest of Rhonda’s performances on this CD are just as good as the one of mine.  I highly recommend you pick up a copy.

Thanks to Rhonda for all her hard work and support of this piece!