Demetricators and Safebook in Aftenposten (Oslo) and FAZ (Frankfurt) 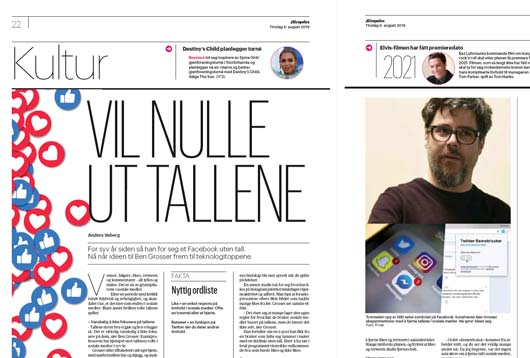 Aftenposten (Oslo) and FAZ (Frankfurt) both wrote about my efforts with social media demetrication as it relates to current experiments at Twitter and Instagram. Unfortunately, both are behind a paywall. But here’s a couple excerpts (using Google Translate):

The last few weeks show that Grosser was ahead of his time. Instagram, which belongs to the Facebook group, is now testing a kind of “metric light” in Australia, Brazil, Ireland, Italy, Japan and New Zealand following successful tests in Canada. Users can no longer see how many Likes have been received by the photos of other users, only [one’s] own can be seen. Instagram’s commentary on the test sounds much like Grosser’s: “Helping users focus on their shared photos and videos – not how many likes they get.” Or: “We do not want Instagram to be a competition.”

“It’s really hard not to focus on [our social media metrics],” says Ben Grosser. The art professor has been fighting the role of numbers in social media for seven years. Grosser sits back in his own home, with dark curly hair and beard, and talks enthusiastically about how the numbers control us. He thinks we lose an important part of the conversation when everything is measured. … Grosser is not among the influential giants of Silicon Valley. He works at the University of Illinois, on almost the opposite side of the United States. His job as an art professor gives him no shortcuts to power. But he knows that Facebook knows his work. When the Facebook Demetricator was new, he saw a lot of traffic from the Facebook offices by looking at the IPs that tested the program, “but I didn’t hear anything from them for many years. It doesn’t seem like they cared enough to do anything,” says Grosser. (until 2016 when they got Demetricator kicked off the Chrome web store —bg)