The Mandible Reconstruction Project was a multi-disciplinary effort to develop an alternative approach to bone replacement using “artificial” bone instead of autograft (harvested) bone. The idea is to fabricate bone implants from hydroxyapatite scaffolds, a substance chemically similar to human bone. That way, when a patient needs a bone implant (i.e. as a result of trauma or cancer), instead of harvesting it from their hip (a risky and painful procedure), it would be instead be custom manufactured for them. The artificial bone implant would be seen by the body as new bone and would eventually be absorbed into and become a part of the real surrounding bone.

Stage I – Proof of Concept

The project was performed in two stages. Stage I was a proof of concept involving a 73 year old female who had experienced severe bilateral bone loss in her mandible. This patient was scheduled for an autograft procedure, but agreed to allow the team to use her scans to design an implant and test its fit. This is where I entered the project. Russ Jamison, the project leader, approached my lab to do the modeling of the implant based on the CT scans of the patient’s jaw. The implant needed to fit precisely to the existing bone, and also had to accomodate a nerve that ran through that section. I worked with Janet Sinn-Hanlon, our biomedical imaging specialist in the lab, and Dr. Michael Goldwasser, our brilliant surgeon, to develop a virtual 3D implant model. Once the 3D model was finished, the file was shipped off to Joe Cesarano at Sandia National Laboratory, where he machined the part out of a previously created hydroxyapatite scaffold. The part was shipped to Dr. Goldwasser and during the autograft operation the fit of the implant was tested. The fit was perfect, proving we could produce the part.

Visualizing the Project and SIGGRAPH Honors 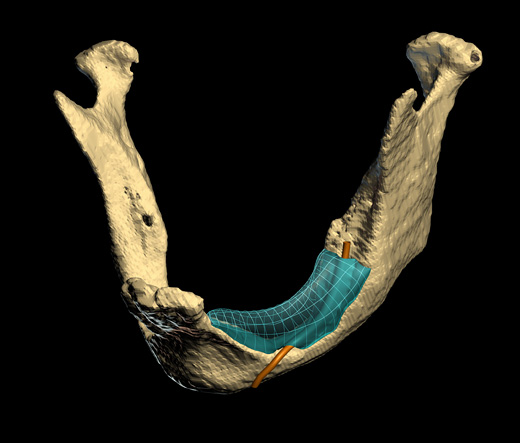 To help announce this accomplishment to the world, I turned to visualization and created an animation that illustrates the process. Working with Sinn-Hanlon and artist Carl Burton, we created a piece that quickly and easily describes the process to a lay person. This work was first used by Medstar TV for content in a health spot for local television news programs across the country. I later submitted the work to SIGGRAPH and it was selected for screening in the Computer Animation Festival (CAF) as one of only two films from the scientific visualization category. The SIGGRAPH CAF is typically seen as the world’s showcase for the year’s best animations. In 2004, the year it was selected, there were 643 submissions from 40 countries, but only 83 works were chosen for screening.

Now that we knew we could execute each step of the workflow, the team turned their attention to making the process a viable clinical tool. Hand modeling of the implant had taken weeks and was just took too long. Instead, we needed to automate this process. Ideally, a doctor could scan a patient, pull up a simple interface to tweak an automated implant design, and then hit ‘print’ to fabricate the device from a 3D printer. Sticking with the mandible as a test case, I hypothesized that we could build a database of jaw shapes using CT scans of healthy mandibles. We could then take a CT scan of a patient’s damaged mandible and subtract it’s 3D geometry from the closest health match model. The result should, in theory, be a precisely-fitting implant model ready for fabrication.

The group wrote a proposal to fund stage II and was awarded a Critical Research Initiative grant from the University of Illinois. To test and implement this idea, we added two more members to the team: Prof. John Hart (CS, UIUC), and Matei Stroila (then a postdoc working with Hart). They and their team built the software necessary to test this concept and, over the course of the year, created a prototype software tool that successfully creates implant models via this process.

Unfortunately, this particular group wasn’t able to continue working together beyond Stage II due to a number of them moving away. While other scientists continue to explore similar methods on the materials side, I have yet to see anyone else tackle the automation part of the equation. I’m sure this will become a reality eventually, but I expect it’s at least five years out. 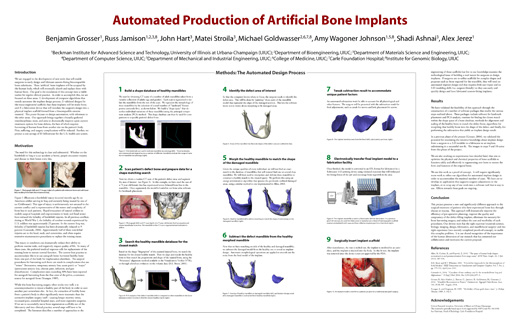