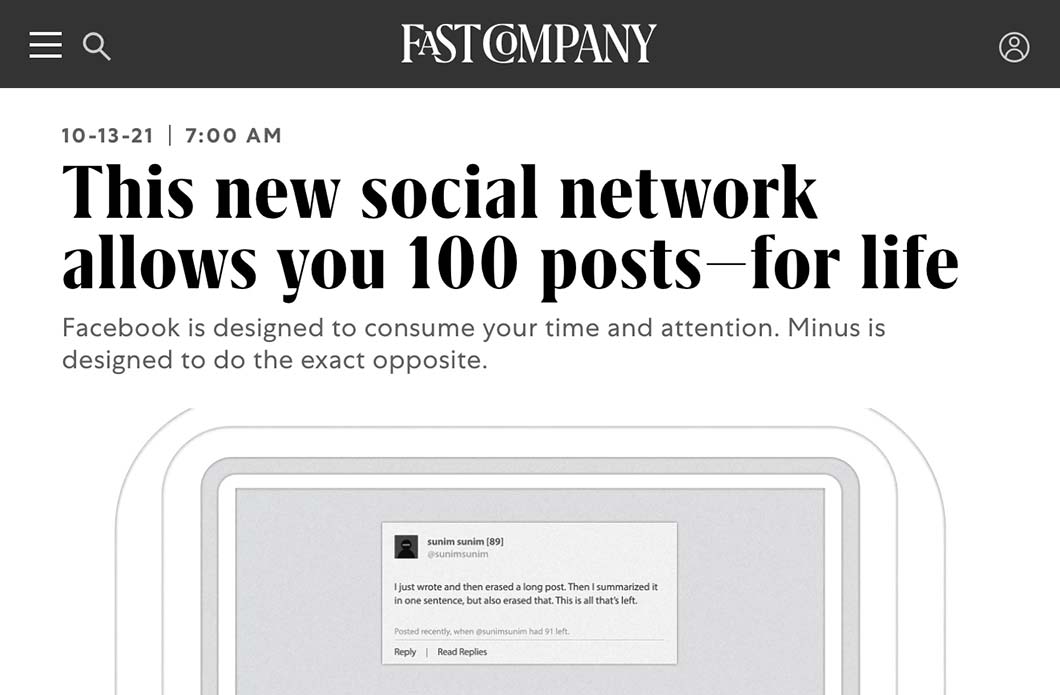 Minus in Fast Company

Several of my social media-related works, including Minus, Facebook Demetricator, Go Rando, and ORDER OF MAGNITUDE were the subject of a feature article at Fast Company:

… Grosser focuses on the cultural effects of social media, particularly the way it preys on users’ insecurities, taps into our desire for instant gratification, and is designed to be addictive. Over the past few weeks, his work has become increasingly relevant, as leaked internal documents and the recent testimony from whistleblower Frances Haugen reveal exactly how much Facebook knows about the damage its platform does.

… Facebook says it is exploring ways to reduce its negative effects on people’s well-being, through features like giving users the option to remove “likes” from posts. This is something Grosser began exploring a decade ago.

… Ultimately, the Minus platform is geared toward spurring conversation, since users could respond to posts freely. “The only way to gauge the success of your post was if there was a conversation in response to it,” Grosser says. “That’s how human interaction worked until social media. We didn’t go to parties and walk away with lists of numbers about how we were being seen. We had to listen to someone, think about what they had said, and respond if we felt compelled to.”

… Minus is a fascinating exploration into how social media might work if constant engagement were not at the center of the experience.

Read the article, which was written by Elizabeth Segran.