ScareMail at Logan Symposium in London 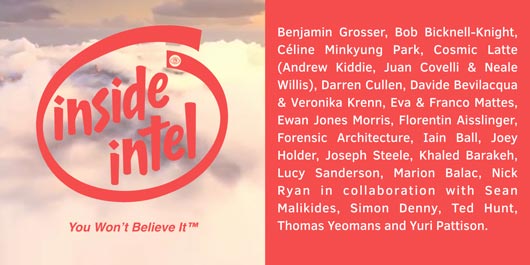 ScareMail at Inside Intel as part of the Logan Symposium at Goldsmiths, University of London

ScareMail will be part of Inside Intel, an exhibition opening on 16 October as part of the Logan Symposium in London. Under the full title of Inside Intel: You Won’t Believe It™, the exhibition:

…presents a speculative “Silicon Valley Imagineering Laboratory,” a 21st century office interior thick with counter-narratives and factual misinformation. Exploring the landscape of contemporary media and technology, Inside Intel investigates their influence on conspiratorial thinking. Artistic methodologies presented in the show range from the architectural modeling of war crimes to speculative design, via browser-extensions and Twitter-bots, taking in both the satirical and the deeply unsettling. Whilst some artworks peddle faux state propaganda and sinister new technologies, others take the form of genuine investigations and purposefully staged analysis. The result is an environment where fact, fiction, and the theoretically possible seamlessly blur into one another. Mirroring the difficulties we all face when navigating the fog of electronic propaganda that pervades our new media ecosystems, Inside Intel demands an investigative eye to separate the signal from the noise.

Inside Intel is curated by Elliott Burns, Jake Charles Rees and India Murphy, and was commissioned in response to and to accompany the Centre for Investigative Journalism’s 2018 Logan Symposium: Conspiracy. It will be held at St James Hatcham, Goldsmiths, University of London, and is up from 16-20 October, 2018.