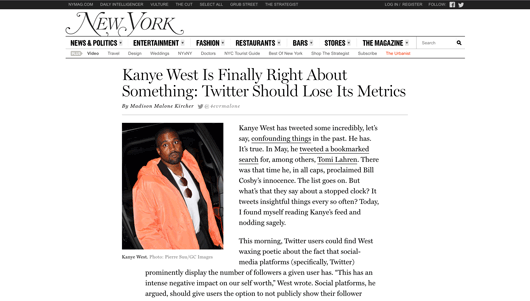 It’s an interesting moment—at least for me—because we’re starting to see increased calls for hiding the metrics on social media platforms. The latest was Kanye West, who tweeted that “we should be able to participate in social media without having to show how many followers or likes we have … [because these visible metrics have] an intense negative impact on our self worth.” Before Kanye, Jack Dorsey, the CEO of Twitter, suggested in testimony before the US Congress a couple weeks ago that he’s reconsidering the role of prominent visible follower counts. After Kanye’s tweet, Dorsey wrote Kanye telling him he’s still thinking about it.

Following Kanye’s tweet, New York Magazine wrote about Kanye’s call, and I appreciate that author Madison Malone Kircher foregrounded that I’ve been publicly calling for social media demetrication since 2012—when I created and released the first social media “demetricator” Facebook Demetricator—and have more recently made possible precisely what Kanye wants for Twitter with my Twitter Demetricator:

Metric-free social media isn’t a new concept. Ben Grosser, a professor of new media at the University of Illinois at Urbana-Champaign and artist, created an extension earlier this year called the Twitter Demetricator — an earlier version, the Facebook Demetricator launched in 2012 — which does exactly what West describes. It removes all follower and engagement counts and shows you only a user’s content. Which leaves you to judge that content purely on what you think of it, rather than what you think of it based on what your peers have indicated they think of it. “Without really meaning to, I’d been glossing over tweets that had relatively few likes and paying extra attention to those that had many. I had even subconsciously developed a sort of multiplier for various Twitter users based on the size of their followings, so that a tweet by a relatively obscure user that garnered 10 likes would stand out in my feed more than one by a famous user that got 100 likes,” Will Oremus at Slate wrote when he gave the extension a try. A 2014 academic study from Grosser described how his extensions “both reveals and eases these patterns of prescribed sociality, enabling a social media culture less dependent on quantification.

If only I could get Kanye to tweet out Twitter Demetricator, I suspect the attention it would produce for the idea of a metrics-free Twitter would help push Dorsey to implement what he has so far only spoken about as a future possibility. Heck, Dorsey himself could tweet out Twitter Demetricator as a way of asking for feedback on the idea! While I have no illusions that Facebook will ever hide the metrics, I’m starting to think it’s possible Twitter might do so. Time will tell…