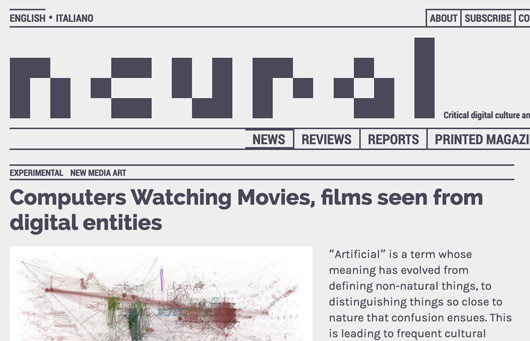 Questioning differences with us as humans driven by narrative, personal history and different pattern recognition abilities, the work also describes an uneasy scene: a movie purposely constructed to capture the imagination of a human audience being viewed by a silent other. Emotion, symbolism, metaphors and random associations are alien to the machine, which analyses on its own terms.

You can read the entire review online, or pickup a paper copy of issue #48. Neural is a magazine/journal from Italy that has focused on new media art, electronic music, and hacktivism since the ’90s. It is published in English and Italian and edited by Alessandro Ludovico.